RSS Feed
← Locusts
Reference Guide for David and the Women →

And behold, a woman in the city who was a sinner, when she knew that Jesus sat at the table in the Pharisee’s house, brought an alabaster flask of fragrant oil, and stood at His feet behind Him weeping; and she began to wash His feet with her tears, and wiped them with the hair of her head; and she kissed His feet and anointed them with the fragrant oil (Luke 7:37-39).

Luke didn’t name the woman who anointed Jesus’ feet, but Simon said she was a sinner. Weeping, she stood behind Jesus, let down her hair and wiped His feet. Her extraordinary behavior disturbed the men. “Among the Jews it was a shameful thing for a woman to let down her hair in public.”[1] In adoration, she kissed His feet and massaged them with oil.

Simon thought that if Jesus were truly a prophet, He would have known the woman was a sinner. Responding to Simon’s thoughts, Jesus reminded him that a host customarily greets his guests with a kiss, provides water for washing their feet, honors them with anointing oil—all of which Simon had neglected to do. The woman, however, in heart-felt humility, fulfilled every courtesy Simon had neglected. Jesus called attention to the proportion of her love in comparison to Simon’s: Therefore I say to you, her sins, which are many, are forgiven, for she loved much. But to whom little is forgiven, the same loves little (Luke 7:47).

The woman’s hair was very long, long enough to wipe Jesus’ feet. I didn’t find any references to Israelite women cutting their hair for stylish purposes. There are references to women shaving their heads and cutting their hair in connection with vows. If a woman took a Nazarite vow, she couldn’t cut her hair for the duration of the vow. When the woman completed her obligations, she shaved her head and presented the hair in the Temple as part of an offering. A woman cured of leprosy shaved her head (Lev. 14:8). An Israelite soldier that took a foreign woman captive shaved her head, trimmed her nails, gave her new clothing and allowed her a month of mourning before consummating the marriage (Deut. 21:10-13).

Women in ancient Israel didn’t wash their hair with the regularity we do today. “How widespread and how frequent non-ceremonial bathing was in Israel is impossible to determine.” [2] Bathsheba bathed, Naaman bathed, Levites and priests washed before serving in the Temple, and men and women cured of leprosy bathed (Lev. 14:8). In the time of Jesus, some religious leaders made a great show of washing their hands. However, there’s no mention of soap for bathing the body or shampoo for washing the hair.

In the ancient middle-east “oil served a hygienic purpose prior to the invention of soap and shampoo.” [3] Although the Babylonians, Egyptians, Mesopotamians, Greeks and Romans used a compound made from oil, fat and caustic soda to wash clothing, the compound was harsh and tended to burn skin and hair. Women made a body scrub from oil mixed with natron, a mineral deposit that resembled baking soda. The natron scrub had some anti-bacterial properties but gummed up the hair and was difficult to rinse out. It is said that Egyptians washed their hair and their wigs in diluted citrus juice, but I found no references that citrus hair-washing was practiced in Israel.

Isaiah, in warning ancient Israel, refers to “well-set hair.” Israel had defied God and would suffer for it. As part of the nation’s punishment, women who prided themselves on beautifully arranged hair, scarves, veils and turbans would experience the baldness of poverty and famine. 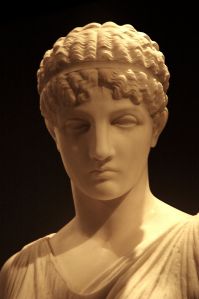 Beautiful Greek woman (public domain)
This image was originally posted to Flickr by Wonderlane at http://flickr.com/photos/71401718@N00/4258937618. It was reviewed on 12 September 2011 by the FlickreviewR robot and was confirmed to be licensed under the terms of the cc-by-2.0.

On occasion women in Egypt and Israel colored their hair. Solomon may have been referring to the use of henna as a coloring agent in Song of Songs 7:6. Your head is like scarlet [or Carmel] and the locks of your head like purple. “Some scholars suggest that this refers to the purplish sheen of hennaed black hair, since elsewhere the woman’s hair is described as black. It is certainly possible that henna was known in the Biblical period as a hair dye. In fact, the earliest evidence for henna use in the Land of Israel are wigs of henna-dyed hair, dating from the Middle Bronze Age (1900-1550 BCE), which were found in the excavations of Jericho; furthermore, Greek and Roman historians specifically mention henna from the Land of Israel being used to colour hair.”[4]

Women paid attention to their hair—covering it, wrapping it into buns, folding, curling and braiding it. They wove ribbons into their braids and fastened them atop their heads with ivory pins. They twined pearls and jewels into their hair. They added gold dust and metallic plates to catch the sunlight.[5] In writing to Christians in Asia Minor, Peter stated that a woman’s outward adorning of arranging the hair, wearing gold, or putting on fine apparel (I Pet. 3:3-4) should never overshadow the inner beauty of a gentle and quiet spirit. The Nelson’s Study Bible states that Peter “is not condemning women who wear jewelry” [6] or dress in an attractive manner. He encourages a woman to appear and conduct herself worthy of one called to inherit a blessing (1 Pet.3:9).

One woman’s hair and humility

All four gospel accounts mention the occasion of Jesus being anointed with oil by a woman before He was crucified, but with some variations (indicated in italics).

Postscript: Who was the woman?

Some scholars say that the differences in the four accounts reflect what the writers saw and remembered, which is the nature of eyewitness reports. These scholars believe there was only one occasion when a woman anointed Jesus, and details from the accounts can be accounted for. Their reasoning is based on speculations:

Other commentators believe that Mary of Bethany and a different unnamed woman anointed Jesus on two separate occasions. “There is no Biblical evidence whatever for identifying this sinful woman with Mary Magdalene or with Mary of Bethany as some commentators have done…as for Mary, sister of Martha, what is said of her devout spirit is strikingly adverse to that of a harlot of the streets.”[7] Lockyer’s argument rests most strongly on his confidence that Mary of Bethany, the dear friend of Jesus, could not have been the unnamed, sinful woman.—Mary Hendren

Mine is a life-long interest in the women of the Bible, and I enjoy exploring the world in which they lived, and discovering the challenges that they faced. I have enough curiosity about them to last the rest of my life.
View all posts by womenfromthebook »
← Locusts
Reference Guide for David and the Women →